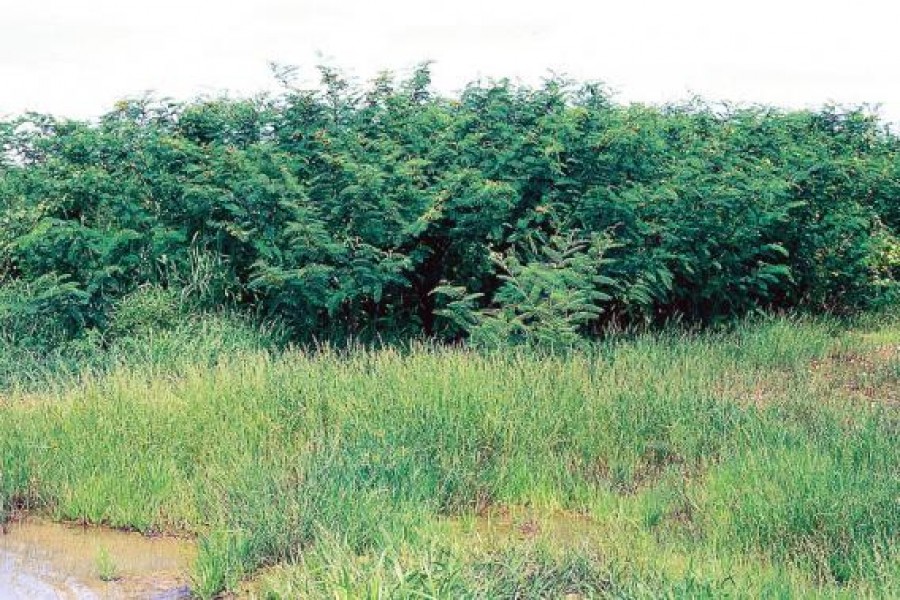 Mimosa is a branched, spiny, perennial shrub. It forms dense thickets that replace native vegetation. It is a Weed of National Significance.

Mimosa has large thorns (5–10 mm long) on the stem and smaller thorns on the branches between the leaves. The greenish stems on young plants become woody with age. Mimosa has a branching taproot which can reach a depth of 1–2 m.

Mimosa is a branched, spiny, perennial shrub growing to 6m in height. It forms dense thickets that replace native vegetation in northern Australia’s ecologically and economically valuable wetlands. It tolerates flooding, and can grow along roadsides, watercourses and seasonally inundated wetlands, and on a wide variety of soil types. It has the ability to invade ecologically sensitive areas and threatens indigenous cultural activities, and pastoral and tourism industries. Once mimosa becomes established, it dominates vegetation and is very difficult to control.

The spread of mimosa occurs by seed. Large trees can produce up to 220 000 seeds per year. The seed pod segments (containing one seed per segment) float on water or attach to clothing or hair. Seeds can also be carried by water during floods, by animals (e.g. in cattle and horse manure or in mud attached to kangaroos and feral animals) and by humans (e.g. attached to clothing and machinery).

What type of environment does it grow in?

Habitats such as the wetlands of Northern Australia are climatically suited to mimosa.

You must report this plant if you see it anywhere in NSW. Help will then be provided to remove and destroy it. Not reporting it is a breach of your legal biosecurity duty.

Information from Department of Primary Industries.
Read more on the DPI Website